Lendzinski Named 2020 Employee of the Year 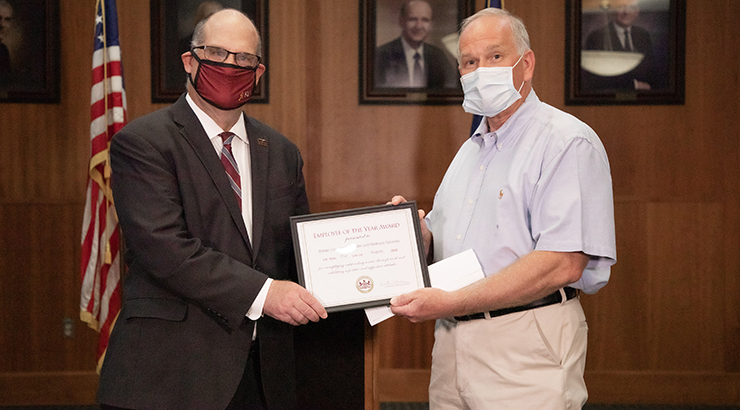 KUTZTOWN, Pa. - Congratulations to William Lendzinski, assistant director of Clinical Services, on being named the 2020 Kutztown University Employee of the Year.

Lendzinski was named the Employee of the Year during KU's virtual Faculty and Staff Convocation and Celebration held Friday, Aug. 21. Lendzinski, Employee of the Month for May 2020, was 1-of-12 finalists for the annual award.

A parent of a student previously nominated Lendzinski for Employee of the Month. Their nomination can be found below.

Lendzinski has been with the university since 2009.

As Employee of the Year, Lendzinski received a monogrammed JanSport Kutztown University backpack, a $300 monetary award sponsored by President Kenneth S. Hawkinson, an engraved glass and marble award and reserved parking for one year in his preferred parking spot.

Lendzinski is the fourth KU Employee of the Year honoree, following Sharon Young from Information Technology in 2017, Tim Flannery from Intercollegiate Athletics in 2018, and Marsha Cressman from Facilities in 2019.

"In April 2020, Kutztown University had many stand-out employees as together the university's faculty and staff members continued to provide for the students and keep day-to-day business operating as usual, at least as usual as possible in the midst of the coronavirus pandemic.

One employee that I have personally witnessed his dedication to the students of Kutztown University is William Lendzinski of the Health and Wellness Center.

To make a long story short, my daughter is a senior at KU. She has complex medical issues. Finding the right combination of medications to manage her multiple conditions was not an easy process. There were several setbacks; the last one, during her freshman year at KU, required her to be hospitalized. For four years, her current medicine "cocktail" has managed her symptoms and has prevented further complications. Unlike most patients, who receive this treatment every six-to-eight weeks, she must be administered the treatment every four weeks before her disease begins to flare.

Over the next few weeks, my daughter and I spent countless hours on the phone trying to coordinate authorizations, prescriptions and plans for a home nurse to administer the treatment. Every day, there was an excuse as to why a nurse was not scheduled. Then, COVID-19 changed everything, at least the reason why the process was not moving along quicker.

Three weeks past her treatment date, I reached out to other facilities in the area, including the Kutztown University Health and Wellness Center, to inquire about services they offered or other options that they may be aware of. A Royersford company was extremely helpful and willing to see my daughter, but when contacting our insurance company, they learned that they were unable to assist us. Just when there was a glimmer of hope, we found ourselves back at square one.

The following Monday, March 23, William Lendzinski returned my call and asked if we had any success in scheduling my daughter's treatment. After learning that we had none, Mr. Lendzinski told me of a company that could possibly help. It was after 5 p.m. when I sent an email to the company. I certainly did not expect to hear from them after business hours, but later that evening, they called. Once again, after several conversations and authorization requests to have my daughter's nursing care released to this company, we finally got the approval to have this company assigned as her treatment team. Finally, we could breathe a sigh of relief.

When it looked as if we were going to have the treatment scheduled, there were travel restrictions put on the nurses due to COVID-19 and they were unable, perhaps unwilling, to travel further than an hour. The company sent a request to four nurses, and none of them could make the trip. We were defeated and were left at the mercy of a nationalized nursing company whose scheduling center was in Texas.

On Thursday, March 26, Mr. Lendzinski called again to follow-up with us. Knowing that her medications work together to keep her in good health, he expressed deep concern for my daughter. With the stay at home order in place, he was reluctant to come out to administer the medication; however, when the company contacted him to let him know that there were no nurses willing to make the trip, he stepped up.

My daughter was four weeks and one day past-due for treatment. Thankfully, her symptoms were minimal. Mr. Lendzinski came to our house and administered her treatment. The stress of the month before was gone and the burden we carried was lifted. He put the health of my daughter before his own, just as so many on the "front-lines" of this new battle we face have done.

Mr. Lendzinski was asked by the company to administer her most recent treatment as well. We are so thankful for his selflessness, and commitment to the health of not just my daughter, but all KU students, especially during these uncertain times in the wake of COVID-19."