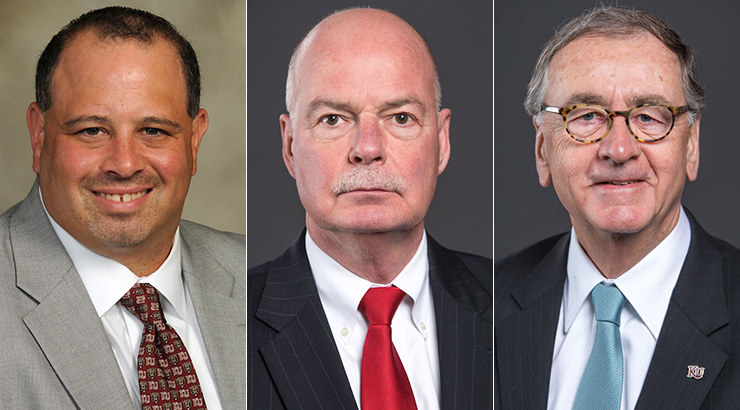 KUTZTOWN, Pa. – The Kutztown University Council of Trustees has appointed new officers for the 2020-2022 academic years.

Ludlow has been a member of the KU Council of Trustees since 2013. He is currently president of Liquid Interactive, a digital marketing agency in Allentown, Pa. His company specializes in digital strategy, technology and design, including marketing, web design and e-commerce solutions.

Before that, Ludlow served Air Products and Chemicals, Inc., for 19 years, handling senior/director level management assignments. Ludlow earned his bachelor's degree in marketing/economics from Indiana State University and his Master of Business Administration in finance/accounting from Indiana University.

Grim is a life-long resident of Kutztown, where he has practiced law since 1969. He holds a bachelor's degree in history from Lafayette College and is a graduate of the Villanova Law School. Grim began his career as an assistant public defender in Berks County and has served as a municipal solicitor in the area for more than 40 years.

Grim was a recipient of the Kutztown Outstanding Community Citizen Award. He is the grandson of James S. Grim (1873-1949), an 1893 graduate of Keystone State Normal School (KSNS) who taught physical science at KSNS from 1900-1945. The Grim Science Building is named in his honor.

Giorno joined the KU Council of Trustees in 2013. Giorno is employed by Malady and Wooten LLP in Harrisburg, Pa., focusing on governmental and public affairs. Before joining Malady & Wooten, Mr. Giorno was the executive director of the REACH Alliance, Pennsylvania's leading school choice advocacy organization. During his tenure, REACH secured passage of the Educational Improvement Tax Credit (EITC) Program, which has been hailed as a national model for providing parents with choices in their children's education and funding innovative programs in public schools.

Giorno began his career in public policy on the staff of Governor Ridge's reinventing government IMPACCT Commission. He then went on to serve on the staff of State Representative Colleen A. Sheehan and in the public affairs office of the Archdiocese of Philadelphia. He currently serves as vice chairman of the Bridge Educational Foundation and Treasurer of the REACH Alliance. Giorno earned a bachelor's degree in public administration from KU in 1994.

Each of the 14 Pennsylvania State System of Higher Education universities has an 11-member Council of Trustees, which carries out board policy and deals with a variety of local issues. The council must have at least two alumni members and one student representative. Members of the council are appointed by the governor of Pennsylvania for a six-year term and are eligible for reappointment. The chancellor is an ex-officio member of every individual university Council of Trustees in the State System.