Dr. Lyn McQuaid ’95, associate professor of mathematics, received Kutztown University’s 2022 Wiesenberger Award for Excellence in Teaching. The annually presented award is given to a faculty member who has demonstrated superlative teaching skills and service to the university. The award was presented during the 2022 Kutztown University Faculty and Staff Convocation and Celebration Friday, Aug. 26. 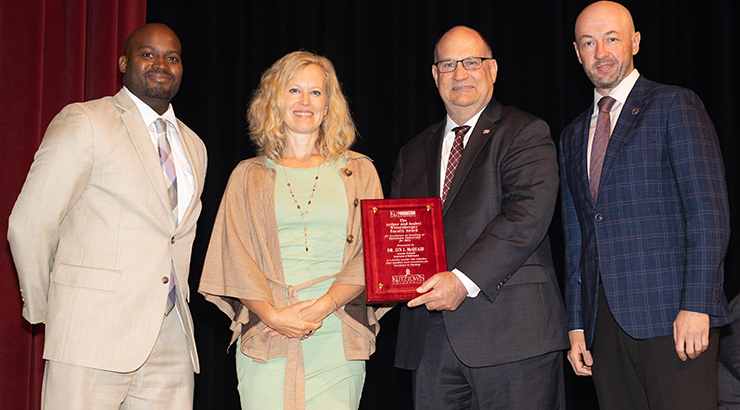 “It is such an honor to be recognized for excellent teaching, which is a cornerstone of the original mission of Kutztown University when it was first established as a Normal School more than 150 years ago.”

McQuaid is beginning her 22nd year of teaching at KU and has taught more than a dozen different courses in mathematics, ranging from general education to graduate level classes. At the start of her KU career, there were no STEM courses offered in the Women’s, Gender and Sexuality Studies program, which led to her creating a course titled “Women in Mathematics” that has now been taught for nearly two decades at KU. McQuaid has been a member of the KU Commission on the Status of Women for 21 years and served in various roles including chair, vice chair and secretary. In 2013, McQuaid and colleague Dr. Yun (Amy) Lu founded a KU student chapter of the Association for Women in Mathematics (AWM) and were subsequently awarded the Community Outreach Award by the National AWM Organization in Fall 2021. All other AWM award winners were schools with Ph.D. candidates in their chapter, which made this accomplishment very meaningful as KU’s chapter is composed solely of undergraduates.

McQuaid has published a handful of papers regarding women in mathematics and most recently, has two papers published with a student co-author. She has another paper with Lu and a student accepted for publication about the activities of their AWM student chapter. Those activities include the annual High School Mathematics Day for Girls that brings students who identify as female and their teachers to KU for a day of mathematical enrichment and fun, as well as a virtual lecture series they have hosted several times per month during the two years of the pandemic that attracted participants from all over the world.

In Spring 2022, McQuaid was a co-primary investigator on a team who received a National Science Foundation ADVANCE Grant. This grant aims to identify and address systemic inequities affecting STEM faculty and the entire university community. This grant has aided in fostering better understanding of the underrepresentation of women and has called to action ways in which the disproportionality of women in these fields can be changed, especially for women of color and other groups in STEM disciplines both on a local and national scale.