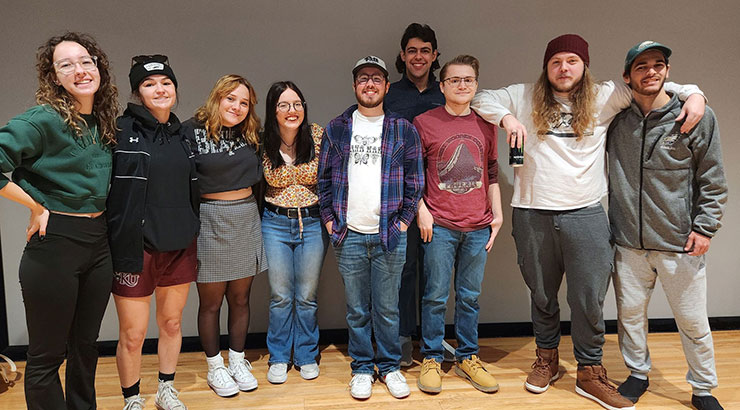 KUTZTOWN, Pa. – Kutztown University Radio (KUR) received seven nominations in different categories for the 83rd Annual Intercollegiate Broadcasting System Conference. For the previous few years, the conference has been held virtually, but this year, it will be held in person in New York. This special event bestows awards to colleges and universities to recognize exceptional programming and student radio stations on a national level.

The Intercollegiate Broadcasting System Conference receives submissions from all over the world and has more than 80 different categories of awards. KUR submits various shows and specials to this conference each year and is once again proud to announce it has been named as finalist in six categories with seven total nominations. This is the second time KUR has received this impressive number of nominations.

KUR offers an array of different types of programming. During the daytime, listeners are likely to hear a laid-back vibe of smooth pop, R&B and jazz vocals, and light alternative. Student, faculty and KU's specialty shows are featured during the afternoons and evenings that encompass a wide variety of styles from rock to rap to blues to talk programming.

Intercollegiate Broadcast System media award winners will be announced during the event Feb. 24-25, 2023, at the Sheraton Times Square.

Revived in 2005 from the remnants WRKU, KU's longtime student radio station, KUR is staffed by more than 50 Kutztown University students. For schedules, shows and events, go to the station’s website at https://www.kutztown.edu/KUR or follow KUR1670 on Facebook and Instagram. To listen to KUR's award-wining content, click the Listen Live link of the station website or download and use an app like TuneIn or Radio Garden and search for Kutztown. Listeners on or near campus can also hear KUR’s live broadcast by tuning to 1670 AM or KU-TV Apogee channel 4.1 or 4.2. Non-smartphone users can hear KUR any phone, cell or landline, simply by dialing 1-(563)-999-3101. To hear archived podcasts of KUR talk programming, search Kutztown University Radio on Spotify. To hear archived podcasts of KUR music programming, search Kutztown University Radio on Mixcloud.