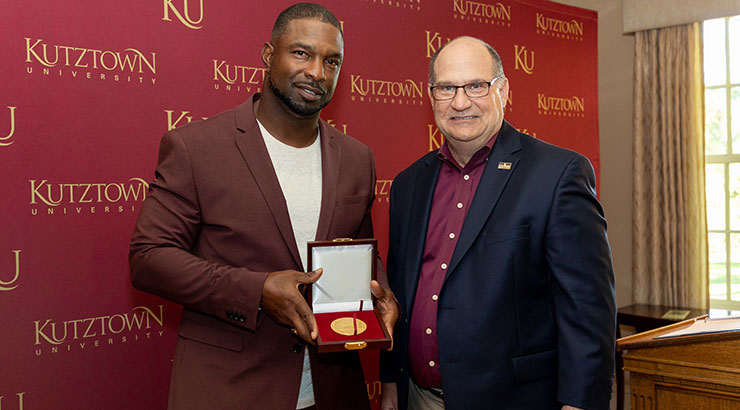 KUTZTOWN, Pa. – John Mobley, one of the greatest players in Kutztown University football and NCAA Division II history, returned to campus Saturday, Sept. 24, and was presented with the Kutztown University President’s Medal, inducted into the KU Athletics Hall of Fame and was awarded his associates degree at a private ceremony at the President’s Residence.

Mobley racked up numerous accolades during an All-America career as a linebacker with the Golden Bears from 1991-95, before going on to earn All-Pro honors and a pair of Super Bowl titles with the National Football League’s Denver Broncos.

The President's Medal was created in 2014 by the president's office to be awarded to individuals who bring honor and distinction to our institution and who serve as examples to our students and our alumni. Mobley is the eighth medal recipient, including William Ribble ’73, long-time member of the KU Foundation Board; Andre Reed ’05, KU Pro Football Hall of Famer; Ryan Vogelsong, Major League Baseball All-Star and two-time World Series Champion; Gregory “Doc” Jones, long-time head coach of the KU men’s rugby team; Dr. Carlson Chambliss, long serving KU professor, philanthropist and scholar; Sandy Green, former mayor of Kutztown and community leader and advocate; and most recently, Bessie Reese Crenshaw ’50, the university’s first African American graduate.

“I have nothing but gratitude for everything that happened today – I am truly honored. Thank you to President Hawkinson and Alex Ogeka,” Mobley said. “Listening to today’s remarks has me reminiscing about the journey. Something I tell my kids all the time when I’m coaching: appreciate the journey. The administration, coaches and staff did whatever they could for me while I was at KU. My family with me today are the ones who helped me get here – I could not have done this without them.”

Mobley grew up in Chester, Pa., and attended Chichester High School, where he exhibited the type of rare talent on the field coveted by every program in the nation. As fate would have it, Mobley’s path led him to Kutztown. The Golden Bears could not have been more fortunate to have him.

During his freshman season, Mobley played in all 10 games, compiling 93 tackles and a pair of sacks on his way to the first of four All-Pennsylvania State Athletic Conference (PSAC) selections in his career. Mobley recorded 86 tackles and seven sacks in 1992, before redshirting in 1993. He came back strong in 1994 with 96 tackles and seven more sacks in 1994, when he was voted Little All-America First Team by the Associated Press for the first time.

Mobley’s encore with the Maroon and Gold came in 1995 as a redshirt senior. It would be a season to remember. In leading KU to a 6-4 record, Mobley produced career-highs in total tackles (112), solo tackles (57), pass breakups (nine), fumble recoveries (four) and interceptions (five). The postseason honors flooded in. He was named 1995 PSAC East Defensive Player of the Year, All-PSAC, AP Little All-America First Team and a regional finalist for the Harlon Hill Trophy, given to the best player in Division II. Mobley was recognized with five All-America honors in total following his final year with the Golden Bears. He was also recognized as the KU Athlete and Senior Athlete of the Year for 1995-96.

Mobley carried the banner for Kutztown University on a national stage, becoming the first player in school history to receive Senior Bowl and Blue-Gray Game invites in 1995. A five-tackle performance at the Senior Bowl against the nation’s best players from top Division I programs drew rave reviews from NFL coaches in attendance and continued Mobley’s upward trajectory as a star prospect, so much so that he received an invitation to attend the 1996 NFL Draft in person at Madison Square Garden in New York City.

Projected as a possible second round pick, the Denver Broncos stunned even Mobley himself when they selected him with the 15th overall pick in the first round. He became the highest drafted player in PSAC history and the third player drafted from KU all-time.

Mobley went on to make an immediate impact with the Broncos in 1996, starting every game as a rookie. He totaled 61 tackles, 1.5 sacks and an interception to earn All-Rookie honors and help Denver reach the playoffs. Mobley finished third in AP Defensive Rookie of the Year voting.

His follow-up campaign in 1997 was even more special.

Bolstered by a career-high 132 tackles and four sacks, Mobley was named First Team AP All-Pro. He was instrumental in Denver winning its first Super Bowl in franchise history, knocking down a Brett Favre pass on 4th and 6 in the final minute to preserve the Broncos’ 31-24 victory in Super Bowl XXXII at Qualcomm Stadium in San Diego.

Mobley and the Broncos capped the 1998 season by repeating as Super Bowl champions, Jan. 31, 1999, with a 34-19 win over the Atlanta Falcons in Super Bowl XXXIII at Pro Player Stadium in Miami.

A spinal injury suffered during a game against the Baltimore Ravens in 2003 brought an untimely and premature end to Mobley’s pro playing career, but not before he put up 621 tackles (including 28 tackles for loss), 10.5 sacks, seven fumble recoveries, five forced fumbles, five interceptions and a touchdown in 105 games across eight seasons.

Mobley was named to the Division II Team of the Quarter Century and in 2012, he was inducted into the Division II Football Hall of Fame. He currently serves as defensive coordinator at Lyman High School in Longwood, Fla.