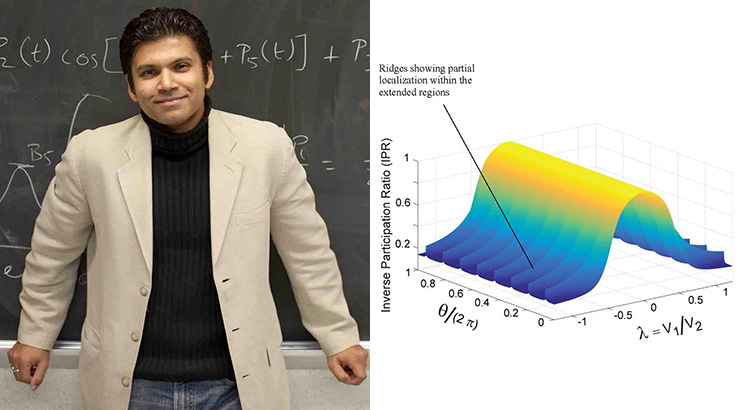 KUTZTOWN, Pa. – Kutztown University's Dr. Kunal Das, professor of physics, has received a patent from the United States Patent and Trademark Office for his invention of a new method for precision detection and sensing of rotation and magnetic fields.

Das began the patent application process in 2018. The successful patent is the first documented at the university in the last 15 years.

This invention takes a completely new approach for conducting precision sensing of both rotation and of magnetic fields. Until now, the state-of-the-art technology for extremely sensitive measurement of rotation and magnetic fields has relied upon the principle of wave interference, such as SQUID (Superconducting Quantum Interference Device). Das' patent develops and utilizes a very different phenomenon called localization.

For rotation sensing, either light or material particles with mass can be the active medium, while for magnetometry, the active medium must carry electric charge. The light should be coherent, such as from a laser, while material particles could be atoms, molecules, electrons, ions or other entities. Das' invention employs a localization transition, whereby the medium becomes localized (more spatially concentrated) or extended (spread out), with the degree of localization sensitive to the rotation or to the presence of a magnetic field.

"As part of my grant-funded research, I had been studying quantum states in ring-shaped lattice configurations when I observed localization features with sharp sensitivity to rotation," Das said. "I became excited when I realized that this could be used for a new sensor design that could be patented. It did not take me long to realize that with some modifications, I could adapt the idea to detect magnetic fields as well."

On the patent process itself, Das commented, “This was a learning experience for me, working with officials at KU and the State System as well as at Penn State who helped us. Writing a voluminous patent description with multiple claims that met both scientific and legal requirements was quite challenging."

An essential difference between Das' patent and prior research is that interferometry does not play a role as it does with all high precision rotation sensors and sensitive magnetometers. Objective measure based on a statistical quantity called the Fisher Information shows that this invention can have significantly enhanced sensitivity compared to methods currently employed.

"This patent could lead to collaboration with companies for high-precision sensing with applications in gyroscopy and fundamental scientific measurements," Das said. "This is a new idea, a new design and I really think it can take rotation sensing and field sensing in a very different direction than it has been in last several decades. Of course, it will take time to have an impact in the real world, but it is already satisfying to see the idea and the design being validated by the U.S. Patent Office."

Das has been awarded with four National Science Foundation (NSF) grants amounting nearly $700,000 in research funding. He is a theoretical physicist working in the realm of quantum physics. His research has been driven by his deep interest in understanding the puzzling and highly non-intuitive foundations of quantum theory. It has been recognized in recent years that quantum mechanics will play an increasingly crucial rule in the technology of the 21st century, with broad applications that will transcend limits imposed by traditional physics methodology.

Learn more about KU's Department of Physics at https://www.kutztown.edu/physics.