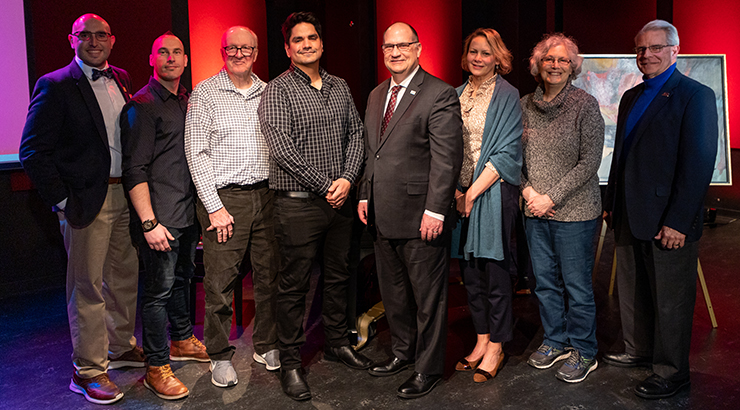 This year's inductees include:

PATRON OF THE ARTS FELLOW

Martha L. Hafer ’02 is highly philanthropic and has strong, lasting ties to KU. She has given back to the university in several ways, much of which focused on the arts. In 2002, Hafer created an endowed scholarship for jazz studies and is a very generous supporter of KU Presents! She is also a significant supporter of local arts and cultural programs, including Reading Pops and Goggleworks.

Jason Bishop ’07 is a professional magician who tours around the world. He has been featured on Broadway as well as national TV numerous times. Bishop has received countless prestigious awards and honors, including four invitations to the legendary Magic Castle. He has given back to KU by making numerous equipment donations to Schaeffer Auditorium and KU Presents!

Edward F. Protzman ’90 is a highly accomplished music educator and conductor/director who has been nationally recognized for his contributions to teaching music to high school students in Pennsylvania, Kansas, Ohio and Canada. Protzman received top ratings in OMEA, KMEA and PMEA, as well as the highly esteemed Grammy Foundation Music Teacher Award. He is also the founding music director of the Pennsylvania Youth Wind Ensemble and the Doylestown Symphonic Winds.

Rosemarie Sloat was an internationally recognized painter and teacher with her works currently exhibited in public and private collections throughout the United States, Switzerland and Mexico. Her painting of Ethel Merman as Annie Oakley hangs in the National Portrait Gallery in Washington. D.C., and she has developed new methods and techniques in painting and drawing. Sloat also started the drawing and painting courses at Kutztown University and is the recipient of the President's Award for Superior Teaching.

Arthur Harrington is a highly respected and known artist, teacher, coach, gallery owner and mentor to many K-12 and college students. He has been a longtime supporter of the Outstanding Senior Art Student awards and invites every winning student to have their own work displayed in his art gallery. Harrington has been featured in Sports Illustrated magazine and has given back to KU for many years. He has provided immense support to visual arts programs on campus, as well as offering free workshops and art shows to KU students.

Each year, up to six new Schaeffer-Sharadin Fellows will be awarded. Individuals, couples or groups of individuals that are chosen from the nomination process are honored by the KU Arts Society and named as a Fellow from one of three categories: patron of the arts, performing arts and visual arts. These positions are open to any KU alumnus, faculty, faculty emeriti or community member who demonstrate outstanding contributions to the arts category. The nomination process is ongoing and year-round, but submissions must be completed by the first Friday of the calendar year to be considered for that year's induction.

The KU Arts Hall of Fame is in the PSECU Wing of Schaeffer Auditorium on the campus of Kutztown University. Those who have been named a Schaeffer-Sharadin Fellow are featured on display for all time, highlighting the prominence of KU's relationship to the highest caliber of artists and art supporters.

For more information or to submit a nomination, please visit: https://www.kuf.org/arts-society/hall-of-fame.