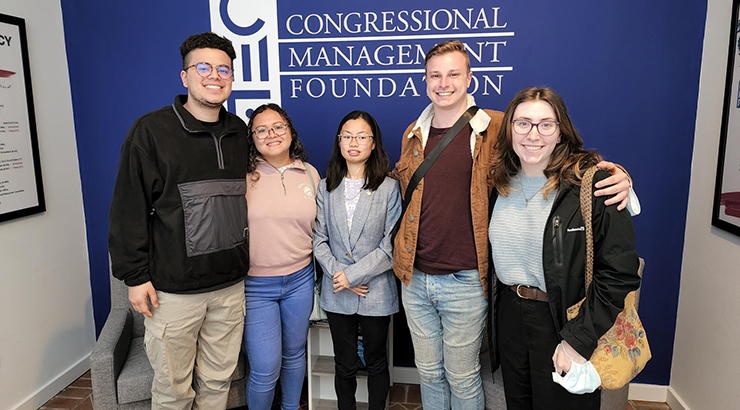 KUTZTOWN, Pa. – Four Kutztown University students spent their spring break with a trip to Washington, D.C. to learn about the history of voting rights in the United States and the importance of enhancing voter access. During the trip, students also learned how to apply tactics to fight for voting rights and other problems in their communities and network with elected officials in Pennsylvania and across the country.

Students Melanie Momphotes, Brandon Ramirez, Elizabeth Kolb and Leah Johnson spent time throughout the week reading, viewing a film, touring and meeting with elected officials and nonprofit organizations. They dove deep into material that outlined the support and opposition efforts for black voting rights both in the past and present. In doing so, they discussed the historical significance of how the ability to vote is a fundamental right to all citizens in America.

Among the nonprofit organizations that the students met with during their excursion were Issue One, an organization dedicated to protecting U.S. elections, Congressional Management Foundation, another non-partisan nonprofit that builds trust and effectiveness in Congress, as well as Friends Place on Capitol Hill, which focuses on civic education and engagement for young individuals.

This trip provided Momophotes, Ramirez, Kolb and Johnson with invaluable information about the importance of good government and how it impacts the lives of every citizen. Another key lesson they took away from their time in Washington, D.C. was how to apply the knowledge of the inner-workings of the congressional office to advocate for policies and initiatives that they are particularly passionate about.

Students met with the Legislative Director and a member of the legislative team for Senator Bob Casey. Students met in the Dirksen Senate Office Building, where they received a tour and had the opportunity to discuss legislation that the Senator has been working on. They also visited the National Museum of American History and the National Museum of African American History and Culture and specifically interacted with exhibits focused on democracy and the history of African Americans in the United States as it relates to democracy, civil rights and voting rights.