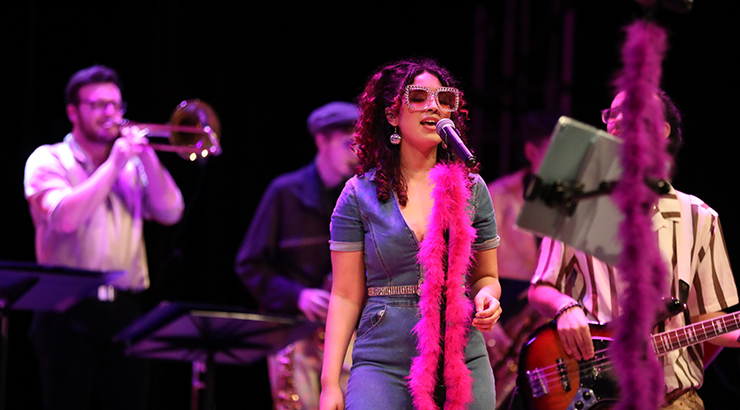 KUTZTOWN, Pa. – Kutztown University's Rock Ensemble I received two 2022 Downbeat Student Music Awards and a singer in the ensemble, Delacey Lora, has been named ‘Best Singer’ in the Pop, Rock and Blues category. These are the seventh, eighth and ninth Downbeat awards for the program, the first time the KU ensemble has won three awards in a single year and was also named the winner in each category.

The ensemble won in both the ‘live’ and ‘asynchronous’ categories of Pop, Rock, Blues Performance category: ‘live’ is a performance that is recorded with no overdubs or studio tricks, taken from a recording from a concert on the KU campus. The asynchronous category includes submissions that come from a 'studio' recording, where it allows parts of it to be recorded separately. For both the live and asynchronous categories, all recordings were done on campus by KU students.

The Downbeat Music Awards are the equivalent of a student Grammy Award and are considered the highest, most important and most competitive honors in the collegiate music field. Submissions are made anonymously from schools around the globe.

The ensemble is under the supervision of Dr. Kevin Kjos, director of Commercial Music Studies, who has been at KU since 1998.

"To be honored by our oldest and most trusted journal for several years in a row is a real testament to our students, their work ethic and their love for each other," said Kjos. "The music they perform is not available for us to buy for them like a traditional college music ensemble – they have to generate all the parts on their own, create the arrangements, rehearse the pieces in both scheduled and unscheduled rehearsals, perform them and ultimately record them. In many ways, working with these young singers and players is like working with a professional group. I have yet to see a challenge that they haven’t risen to. It’s a pleasure and honor to teach the band."

There are presently four coached rock ensembles at KU, with auditions for admission being held the first week of each semester. The ensembles try to find a place for whoever wishes to play.