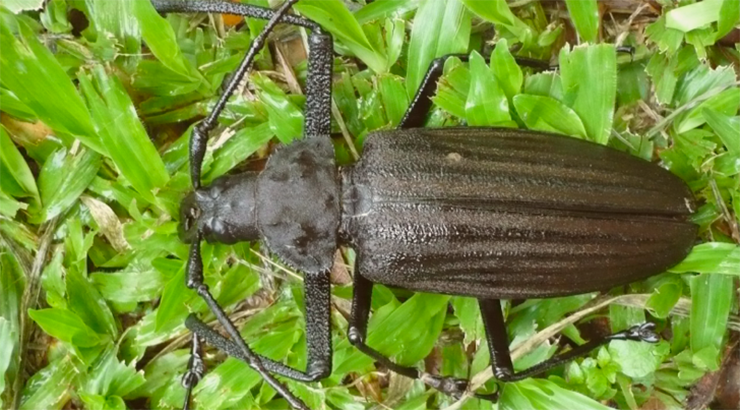 KUTZTOWN, Pa. – Dr. Gregory Setliff, professor of biology at Kutztown University, along with Dr. Dave Waldien, former assistant professor of biology and current International Union for Conservation of Nature (IUCN) employee, have been diligently working with and supporting KU students on their efforts to identify new species for the IUCN. Recently, the team has successfully published a Red List Assessment for a species of beetle, the Giant Longhorn Beetle (Xixuthrus heros). Their assessment was included in an article published on the website of The Global Center for Species Survival at the Indianapolis Zoo.

Waldien, Setliff, KU students and an array of other multidisciplinary professionals have been working on The Pacific Invertebrate Red List Project that includes more than 90 potential species to be assessed. Their initiative through the IUCN Species Survival Commission and the Terrestrial and Freshwater invertebrates was created to get KU students involved with biodiversity conservation. Through this project, they hope to increase the number of new species assessments added to the Red List, specifically from underrepresented groups of organisms from poorly-studied regions of the world. Another focus is to increase the number of assessors trained to write these species assessments.

The Global Center for Species Survival at the Indianapolis Zoo posted a blog article to their website, where they cited KU students’ and faculty’s efforts to support the IUCN Red List. It recognized KU’s involvement in publishing their Red List Assessment for the endangered Giant Fijian Longhorned beetle.

The Giant Fijian Longhorned beetle was officially added to the IUCN Red List in December 2021. KU faculty/student co-authors have submitted two other assessments for publication on the Red List which have been successfully accepted for publication as well.

Their project has grown from an initial group of nine KU undergraduates to include more than 50 researchers, educators and students from more than 25 universities, zoos, museums, non-government and government agencies from 10 countries (USA, Philippines, Malaysia, Bolivia, Algeria, Nigeria, Rwanda, Uganda, Kenya and Fiji).

A long-term goal for the broader network is to assess 1,000 new species over the next five years. KU students are contributing to this goal by drafting assessments for 10 species in 2022.

This semester, KU students Zachary Glass, Hailey Winham, Steph Stronsick and Jess Wesch are working with specialists in France to finalize assessments for several species of the Eupholus and Pantorhytes weevils from New Guinea. Shannon Keller is working on assessing a Fijian brentid beetle. Jasmin Cordero is assessing two species of weevil from New Guinea and the Solomon Islands and Cooper Hallman is starting to investigate a group of beetles from the tropical dry forests of the Caribbean. All these students have been trained as IUCN Assessors.